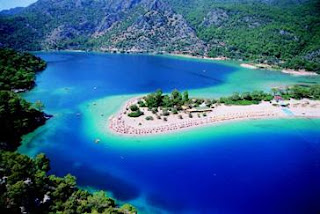 Time for a vacation nearby Mediterranean beaches is closing by, putting us to sweet torments while choosing a destination where we’ll spend some unforgettable time. Maybe a closer look into these magnificent Mediterranean beaches will make your choice easier; however, we believe you’ll forgive us if the effect turns out to be quite the opposite. So, there we go:

Patara Beach stands out from other beaches thanks to its longitude, biodiversity and environment, all of which placed it among the shortlisted candidates for the best beaches of the world. We could also define it as somewhat isolated because it is part of a National Park, which holds back the mass development of the area. The beach itself is approximately 15 kilometers long, and you can always find a fitting place just for you with other people barely in sight. Note that you’ll need parasols because tall vegetation is scarce, which you can rent in the only disposable café in the vicinity, at the end of the path to the sandy Patara Beach. Besides gorgeous beach and beautiful blue waters, the Patara archaeological site is another lure for tourists. Here, you can see a theatre, a triumphal gate, a basilica, etc 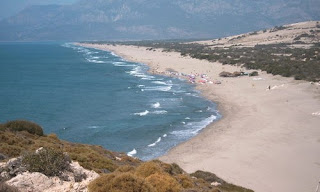 Patara Beach is nestled between mountains on its ends, with sand dunes along the way, located around 80 kilometers to the south of Fethiye, which makes it an excellent choice for a one-day excursion. A nearby Patara village is an inexpensive place, but the accommodation facilities are limited – only a few hundred beds. Staying at the beach is permitted until sunset, when endangered Caretta-Caretta turtles come ashore to nest their eggs.

Main features of Ölüdeniz Beach, which is an equal competitor to the Patara Beach when it comes to the overall beauty, are crystal clear turquoise waters, numerous tourist facilities (restaurants, hotels, bars…), and various sport opportunities. This long beach is a short driving distance from Fethiye, and its name is literally translated as “the dead sea”. This is because the waters here are generally very calm (although an interesting legend is also attached), which makes the beach especially children friendly. Even when the sea storms arise, the Blue Lagoon, which is connected to the sea by a small channel, is still peaceful. The sandy beach is surrounded by elevated grounds from all sides, with green hills and mountains making a perfect backdrop.

Oludeniz Beach also features a prestigious Blue Flag status, and is among the most photographed Mediterranean beaches. Available sports include water sports (scuba diving, jet skiing, parasailing), beach sports, paragliding, hangliding, etc. The area is designated natural reserve, and the urban development is strictly controlled. Although the beach tends to be somewhat crowded in July and August, there is enough space to make yourselves comfortable; water temperature is most pleasant in September, and from here you can take interesting boat rides along beautiful coastline.

Iztuzu Beach, rightfully considered among the best Mediterranean beaches of Turkey, is a secluded one, reachable by a 20 minute boat ride from Dalyan, or by a relaxing walk from the last stop of the local bus through a national conversation area. Thanks to its distance from the “civilization” and longitude (around 4,5 kilometers), it never grows overcrowded. The sandy beach accesses beautiful shallow waters, and is tucked in a beautiful environment, featuring green hills stretching into the sea on its both sides, with some Lycian cliff tombs that are free to be explored. Being on Iztuzu Beach during the sunset is especially enjoyable. The only tiny discomfort might be caused by bugs from a nearby swamp.

Iztuzu Beach can be enjoyed from 08:00 until 20:00, because it is a Caretta-Caretta turtles’ breeding place. The reserve is also home to various bird species. Take note that parasols cannot be put into the sand in June and July because turtles’ eggs are hatching right under the surface. 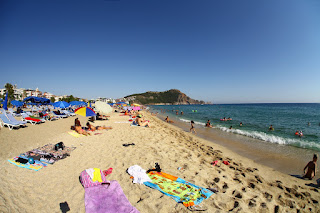 Cleopatra Beach, in Alanya, is named after the famous Egyptian queen due to a belief that Cleopatra visited the region and swam in the beautiful waters of this bay. The beach is located to the west of a peninsula, facing Damlatas Cave, and features a Blue Flag. Although Alanya has another town beach on its eastern side, Cleopatra Beach is more popular because of its secluded position. The beach is sandy, characterized by outstanding clearness of its waters, and diverse tourist facilities (bars, sport grounds, etc.) are practically at hand. The peninsula features in its base Forforlu Cave, which is a favorite spot for swimmers. Another nearby attraction is a historical castle, created by the Seljuk Dynasty.

Don’t forget your goggles before you head to Cleopatra Beach, and you will enjoy the exceptional diversity of the sea life. There is a section of the beach where swimmers have the opportunity to swim alongside giant turtles. 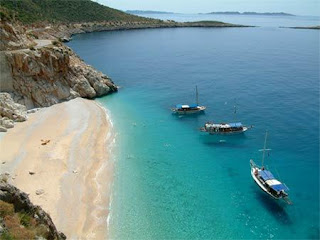 Kaputas Beach, located beneath the Kalkan to Kas road, almost rivals the Oludeniz Beach as the most photographed beach in Turkey. Located roughly 10 minutes ride by dolmus (local bus) from Kalkan, the Kaputas beach can be reached by a flight of steps down the gorge. The beach is more pebble than sand, so make sure to bring with you adequate beach footwear. Once in the water, you will reach the deep sea pretty close to the shores. No fixed facilities are present, only local vendors with stalls selling snacks. Since parking space is rather scarce, the best option to reach Kaputas Beach is the above-mentioned dolmus.

Kaputaş Beach is a part of a national preservation program for Kaputaş Inula, the yellowish plant that grows only on the beach and its closest vicinity. Around 250 other plants grow only in the region of Antalya. Informational plaques keep you thoroughly informed about these rare and precious plant species. Clear waters of the beach are somewhere between turquoise and azure, and swimming is quite enjoyable. Kaputas Beach, due to its location, never gets crowded, which, in unity with the spectacular environment, makes it a perfect setting for enjoying a peaceful time with someone special.

Girne (or Kyrenia? Who cares about the name? It’s an amazing city…)