So, if you are planning to enjoy an Aegean seaside vacation, visiting Kuşadası is one of the strongest candidates of your destinations. Or, if you are on a cruise tour in the direction of Aegean Sea, Kuşadası Port is going to be waiting for you to welcome.

Here, I have to tell you that, even though I am a big admirer of Aegean Sea, and any part of Aegean Shore is a dream destination for me; I have to tell my opinion about Kuşadası that it is not in the shape that it should be.

After being a popular destination for local and international tourists, Kuşadası has grown so much, but in an uncontrolled manner. And also, the commerce over there, and the potential of the money that is possible to earn especially from the luxury cruise ships attracted so many workers and investors from every part of Turkey.

So, Kuşadası is not an Aegean style small town anymore that it used to be around 20-25 years ago. 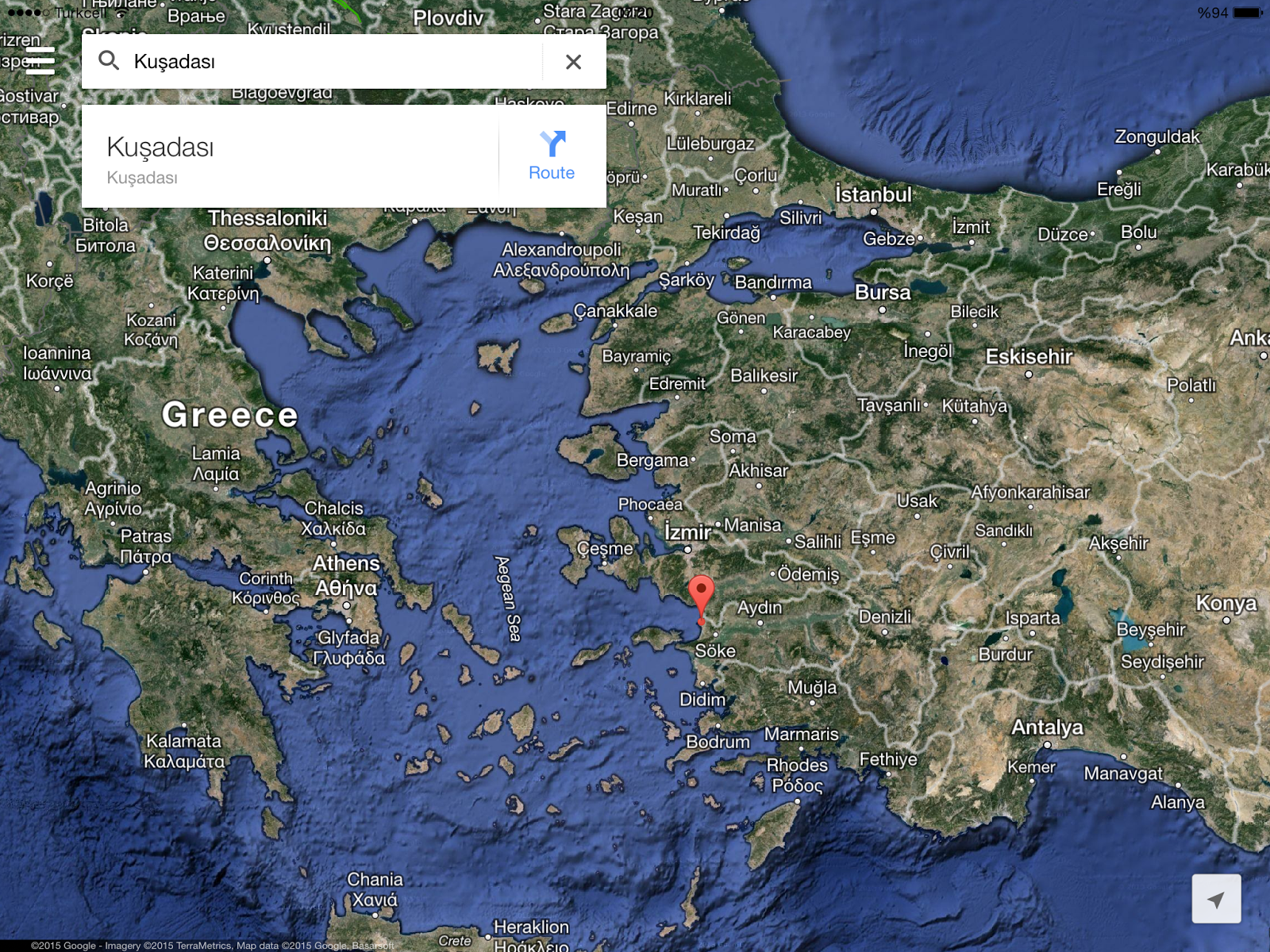 Well, after being enough negative and coming to the edge of persuading you in not coming to Kuşadası this summer, I guess I need to change the subject to the nice sides of visiting Kuşadası. Yes, there is absolutely so much nice stuff that is waiting for you inside and around Kuşadası. I am just telling that it could be better, much better; but it’s still good enough.

How will I Go To Kuşadası?

If you are driving to Kuşadası, there are three directions that you could select from.

The first one follows the road along the shore, this route will take a longer time but it’s going to be a nice trip especially if you are driving about evening time just before the sunset. The view in this route selection is so good. 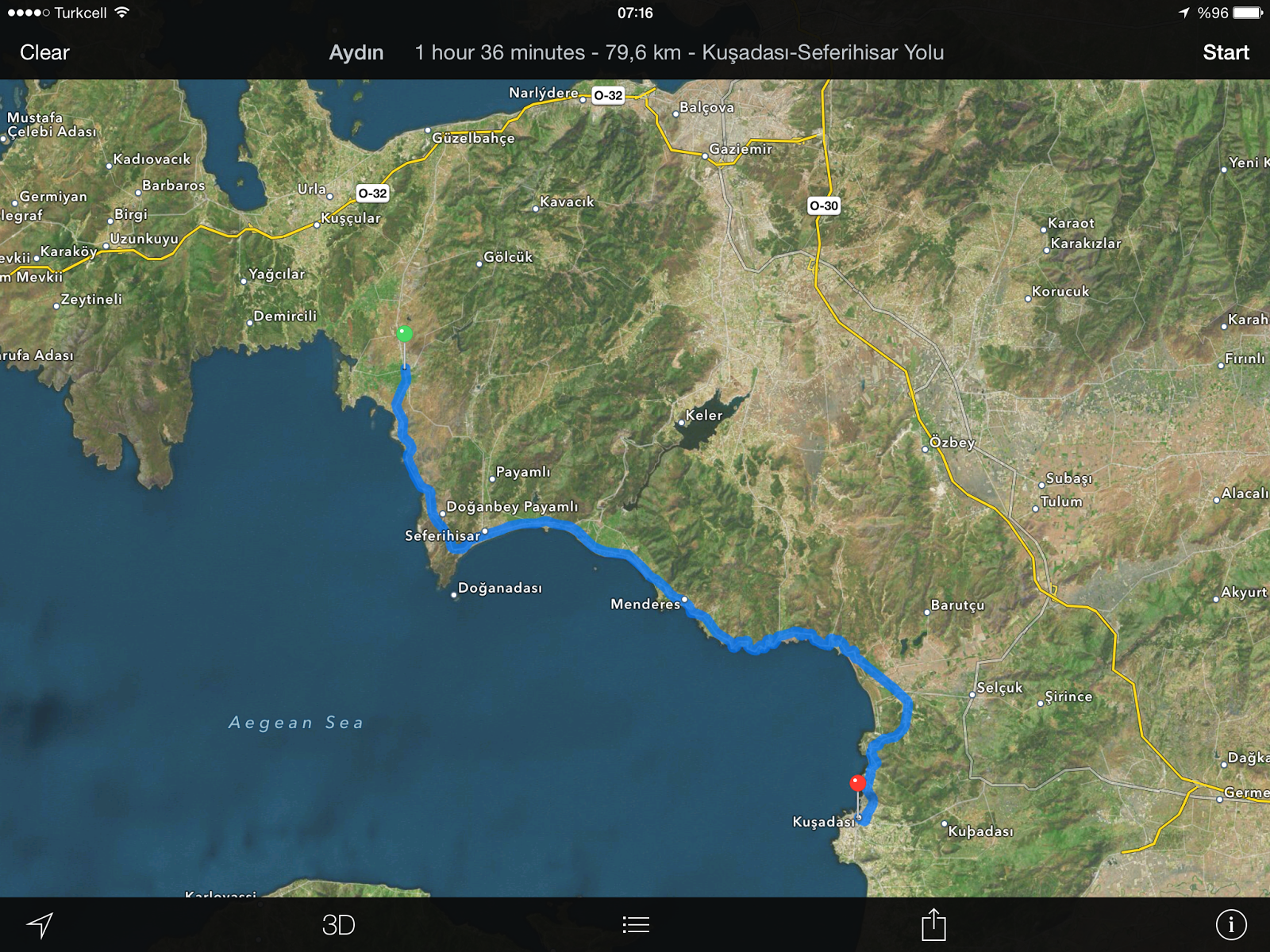 The second one (especially while coming from İzmir) is turning to Kuşadası direction at Selçuk. That route also has quite nice views, and you will be able to notice the place of The Ancient City of Ephesus on the way. And yes, there are some nice stops to eat good food on this direction. The third option is passing Söke to reach Kuşadası. This route is also fine, and the fastest one. There also is good food along the way. Here I could give you a secret as a local lived around there for a long time; if you like meat and if you have ever tried raki and would like to drink again; there’s Yaylaköy on the way from Söke to Kuşadası – you will never forget the meat you will eat there. Having a good dinner with raki at Yaylaköy can be described by only one word, that is: “awesome!” 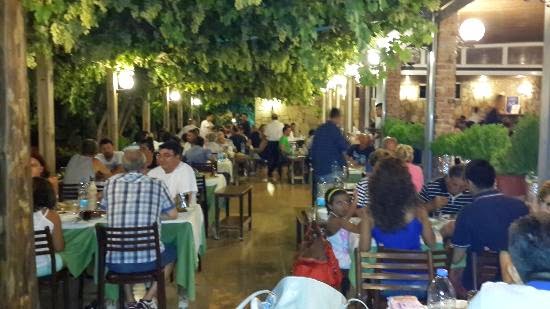 Other than that, you might be a passenger of a cruise ship visiting the Kuşadası Port who visits Kuşadası usually only for one day. The passengers of the cruises generally do a trip to Ephesus, then visit The House of Virgin Mary, and do some carpet and jewellery shopping on the way back to Kuşadası (or rather do it inside Kuşadası) and see the town center of Kuşadası and then get back to their ships for another adventure.

The Island That Gives The Name To The Town

So, let’s start with the Kuşadası Port assuming that you are one of the majority who is coming to Kuşadası with a tour on a cruise ship.

The first thing you are going to see just next to the Port is the Pigeon Island (that Island also gives the name to the town; Kuşadası in Turkish has the meaning of “Bird Island”). The island is a small nice one with a castle and a museum on it. There also are some cafés and/or restaurants on and around the island to enjoy your time during or after your short tour on the island.

The Town Center and The Old Town Bazaar of Kuşadası 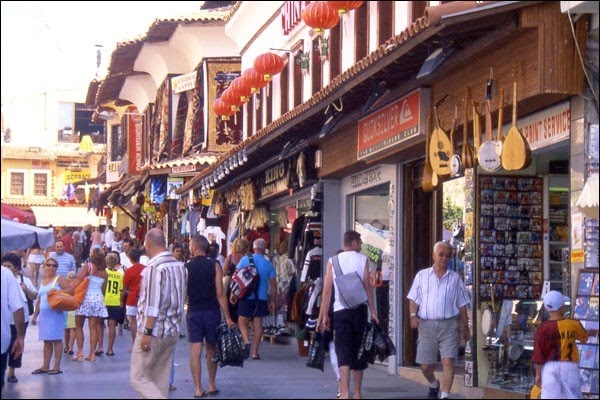 But the market place and bazaar of the town is just on the opposite side of the road. As you pass the road to enter the town center, you will see the Kervansaray Hotel. 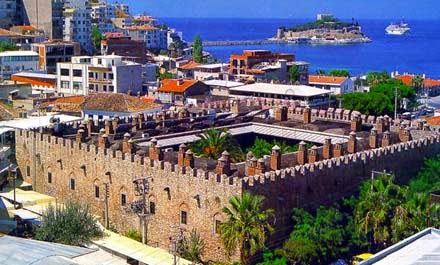 The building looks like a castle from outside and is an old caravansary named “Öküz Mehmet Paşa Kervansarayı” (I know it’s going to sound funny but the meaning is something like: General Ox Mehmet Caravansary). That structure is constructed by the Grand Vizier of Ottoman Empire (Öküz Mehmet Pasha) of the time at 1618. The caravansary is now used as a hotel and as a touristic facility. If you are lucky enough when you arrive at Kuşadası, you might catch the Turkish Nights (as far as I know it happens twice or three times a week) that includes good food with an all-you-can-eat buffet and some nice music and dance shows. As I mentioned, the place is also an hotel that you may consider to stay if the price is ok for you, because the location is just in the middle of the town, close to (just in the middle of) nightlife and shopping and a nice boutique hotel to enjoy.

Even if there’s no Turkish Night or you are not staying there, you can still visit or have a dinner, because the place is nice. 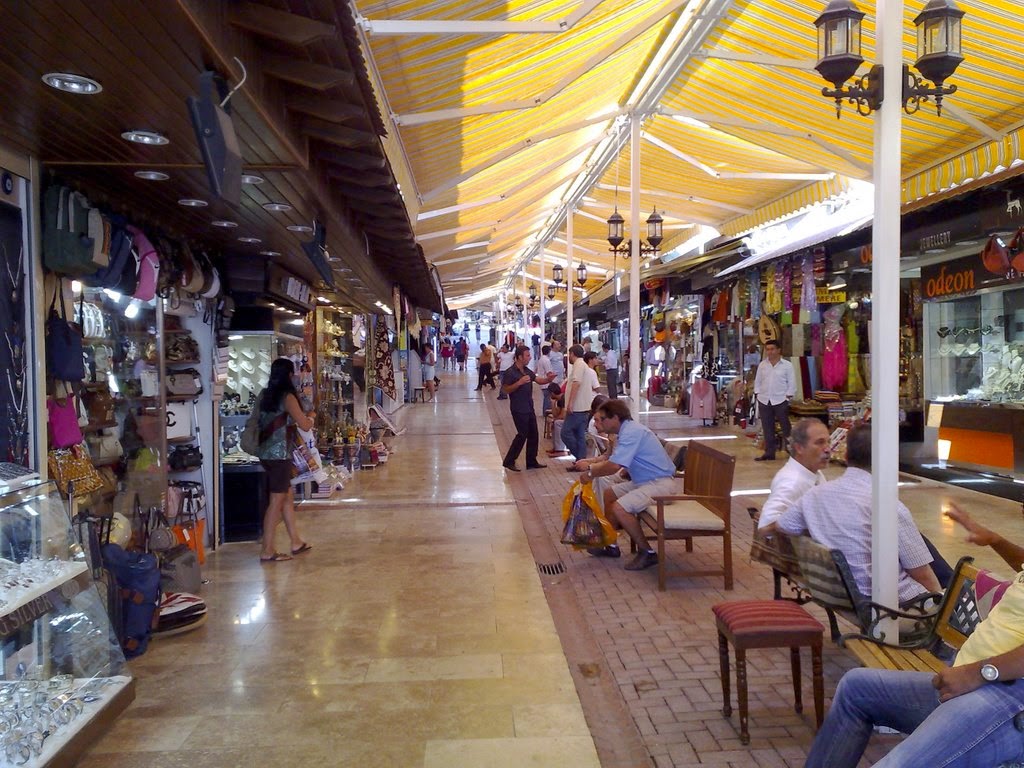 And then, there starts the shopping and market place of the town and the “Old Town Bazaar”.

The place is called “Kaleiçi” (means “inner part of the fortress”). You can enjoy shopping inside the bazaar and see the narrow streets of the old town. For the night time drinks and some fun there is the street of bars among these narrow roads. 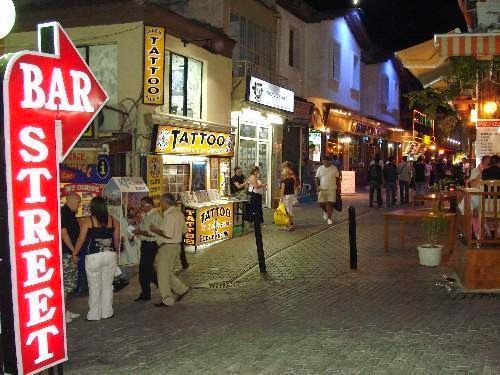 Beaches and The National Park (Called “Kalamaki”) at Dilek Peninsula

So, after we explore the bazaar and the bars, we now may start to think about where to swim and sunbath. Before starting to talk about the beaches, here I have to mention that the best part of Kuşadası for the travelers is the hotels that it has. There are so many selections of hotels, pensions and hostels for every kind of budget. But especially the biggest hotels around the town have good facilities on the shore to enjoy the Aegean Sea and the beautiful summer sun. There are also two water parks to spend all your day especially if you are with your children.

There are numerous beaches around Kuşadası to enjoy, but the best ones are at the National Park side (about a little bit more than half an hour drive on a 23-24 km.s distance). The other beaches around Kuşadası are not the best ones on the Aegean shore but the sea at the beaches of National Park on the Dilek Peninsula is nearly fantastic. If you have time to drive there, I would advise the National Park also for real fresh air, trekking and picnic. (Entrance fee for National Park is around: Person: 1,5 $, Car-including people inside: 7 $, minibus: 20 $…)  There are also some good seafood restaurants on the way to the National Park. The last thing I remember about the Dilek Peninsula there is the great smell of pine forest mixed with the amazing smell of lonicera (or so called honeysuckle) at the entrance of the Park. There are four bays that you can use the beach over there, the closest one to the gate (İçmeler Bay) is the most crowded one, you might not want to use there, and the fourth one is said to be the best one among them. 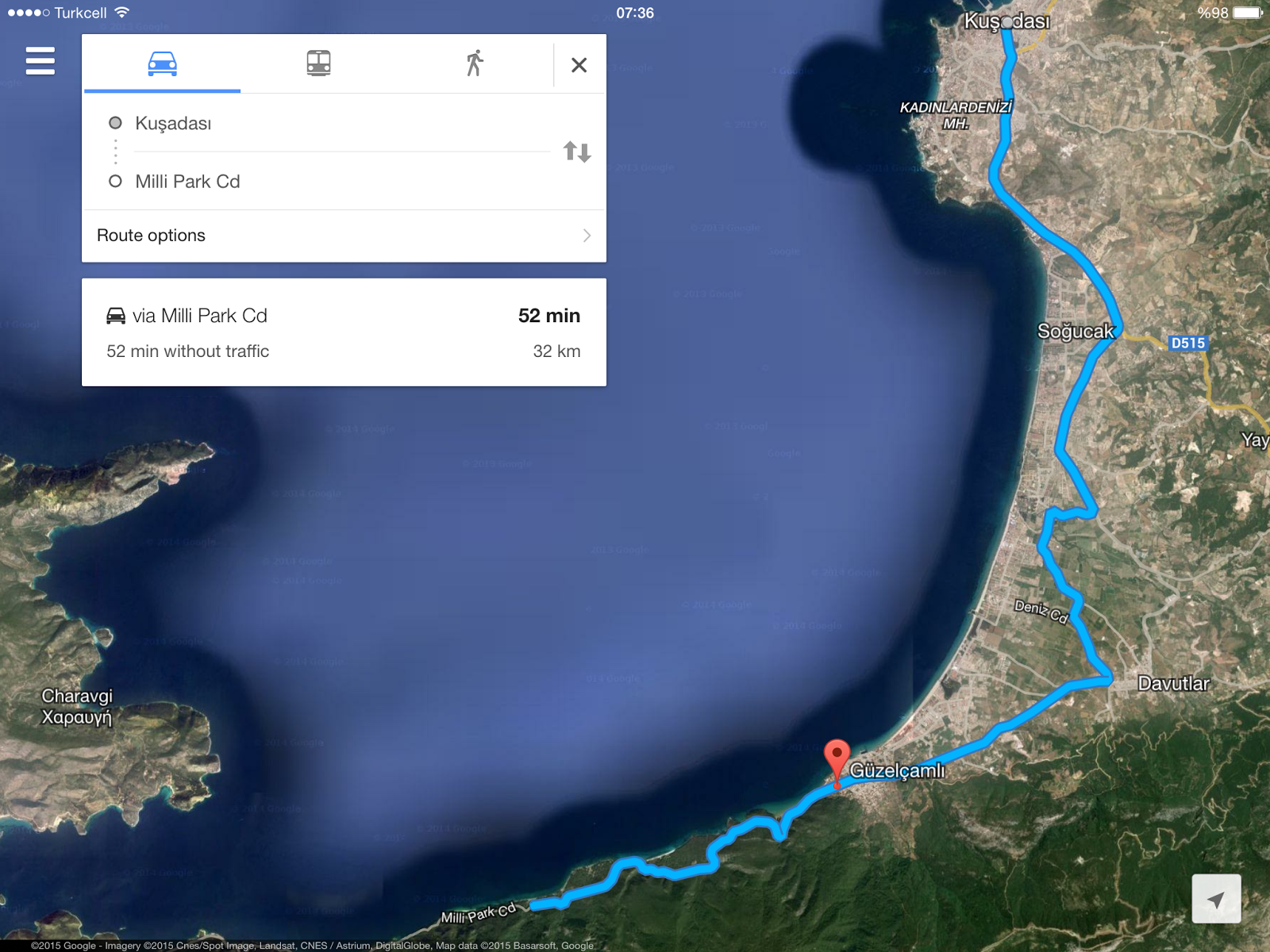 And another thing to see in the National Park is the hidden Zeus Cave just close to the entrance gate. 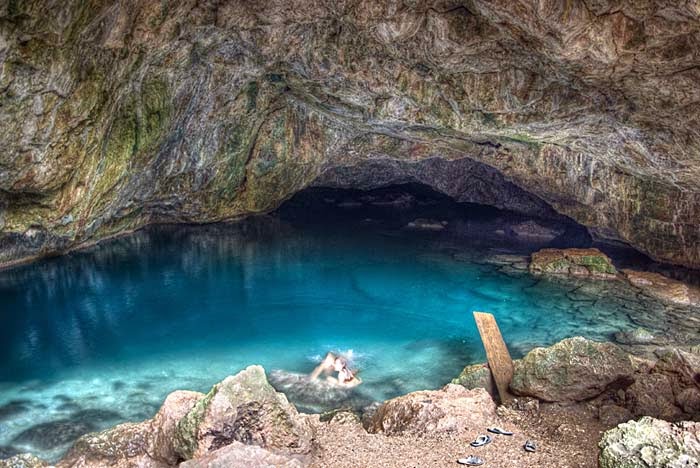 As I mentioned before there are good fish restaurants on the way to Kalamaki, but the restaurants at the town center of Kuşadası shouldn’t be underestimated. At the town center and close to the Port there are lots of good selections of seafood restaurants. My favorite fish as Aegean born ones are: bream (çipura), sea bass (levrek) and red mullet (barbun). The environment at the restaurants are so tasty and pleasant but before you start eating, make sure that you bargain about the price in order not to pay too much for the seafood you selected.

If you are not a fish lover, you can try any kind of Turkish kitchen products such as kebabs or the sandwich selections of the buffets on the shore could be tried. Anyways, especially having a dinner at a seaside place is going to be a nice experience for you, because the evening time over there is a little bit poetic because the sun goes down on the sea and the scene will be picturesque with the color that the sky has at dinner time.

So, as the result, Kuşadası, as a crowded touristic location at summer time, is a nice place to see, but you won’t be missing too much if you don’t visit the town center especially at summer. But, at the autumn and winter, I like Kuşadası, because it becomes back a pretty seaside town without noise and pandemonium.

Here are some of the best recommended hotels in and around Kuşadası:

(You can check the prices, specialties and user views by clicking on the name of the Hotels. And by clicking here you can list all of the hotels in the area. )

I wish you will find whatever you are looking for, and enjoy your time at Kuşadası. Have Fun!

4 thoughts on “Kusadasi – Could Be Much Better But Still Good Enough!”

Girne (or Kyrenia? Who cares about the name? It’s an amazing city…)