As a beautiful seaside town and a very popular touristic destination, Ayvalık is situated on the northwest coast of Turkey. The Mediterranean climate which creates dry and hot summers with an average temperature of 27 ºC, will make your vacation in this town a very pleasant one. Comparing with the Souther parts of the Aegean Coast (Marmaris, Bodrum) and the Mediterranean side (Antalya, Alanya, Mersin, Adana) , Ayvalik is absolutely cooler and you will not suffer too much during the extremely hot days of summer.

It is located on a narrow coastal plain, surrounded by hills, pine forests and olive groves. Another reason to see Ayvalık is olive. The city is famous for the cultivation of olive trees, and there are more than 20 factories for the production of olive oil in the vicinity of the town. 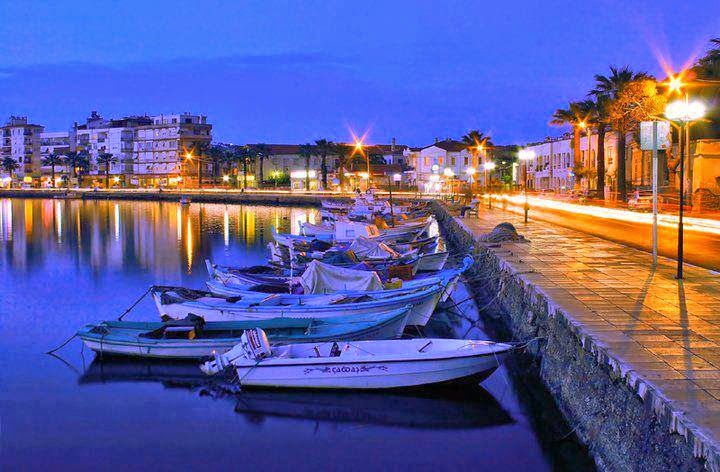 Walking through Ayvalik you can see the old Ottoman houses, as well as orthodox churches – some of them are converted into mosques. Tourists especially enjoy the popular taverns and outdoor restaurant, which open their doors during the summer season.

In recent years, this place has become an important point of attraction for many scuba divers, thanks to its rich and interesting underwater fauna. You can find corals, sponges, various aquatic plants, as well as the many strange species of fish. And, if you like fishing, you can find all kinds of equipment necessary for fishing in stores and fishing areas around the coast. Yes,it’s true; I have a close friend who drives all the way from time to time around 750 km. from Ankara to Ayvalık just for fishing.

How to go to Ayvalik? If you want to go to Ayvalik by plane, you should know that the nearest airport is located in the city of Izmir – Adnan Menderes International Airport (There also is a closer airport in Edremit but it’s a domestic one and there are not much flights to Edremit Airport). Many planes of world-renowned airline company lands at this airport, so it will not be difficult to get to your destination using any of them. When you land at the airport in Izmir, a large number of taxis and rental cars are at your disposal to take you to your desired location in Ayvalik. If you like traveling by train, another near train station is in Balikesir (This is some kind of different train-an intercities and for long vayges- then you will take to Aliağa from the airport-that one is rather for daily use-called “Izban”.). You can take the train from Basmane Station (you can take the other train-Izban to go there) at the Center of İzmir to Balıkesir. After that, you can cross the route from Balikesir to Ayvalik by bus, and it will take you less than two hours.

However, most tourists prefers to drive on their own, so if that’s your choice too, you need to know that Ayvalik is located near the main highway Canakkale – Izmir (D550/E87). Above, you can see the destinations from the two airports of Istanbul, but also you can take the Ferry from Istanbul to Bandırma and then you can drive from Bandırma to Ayvalık. That will be another pleasant trip too. 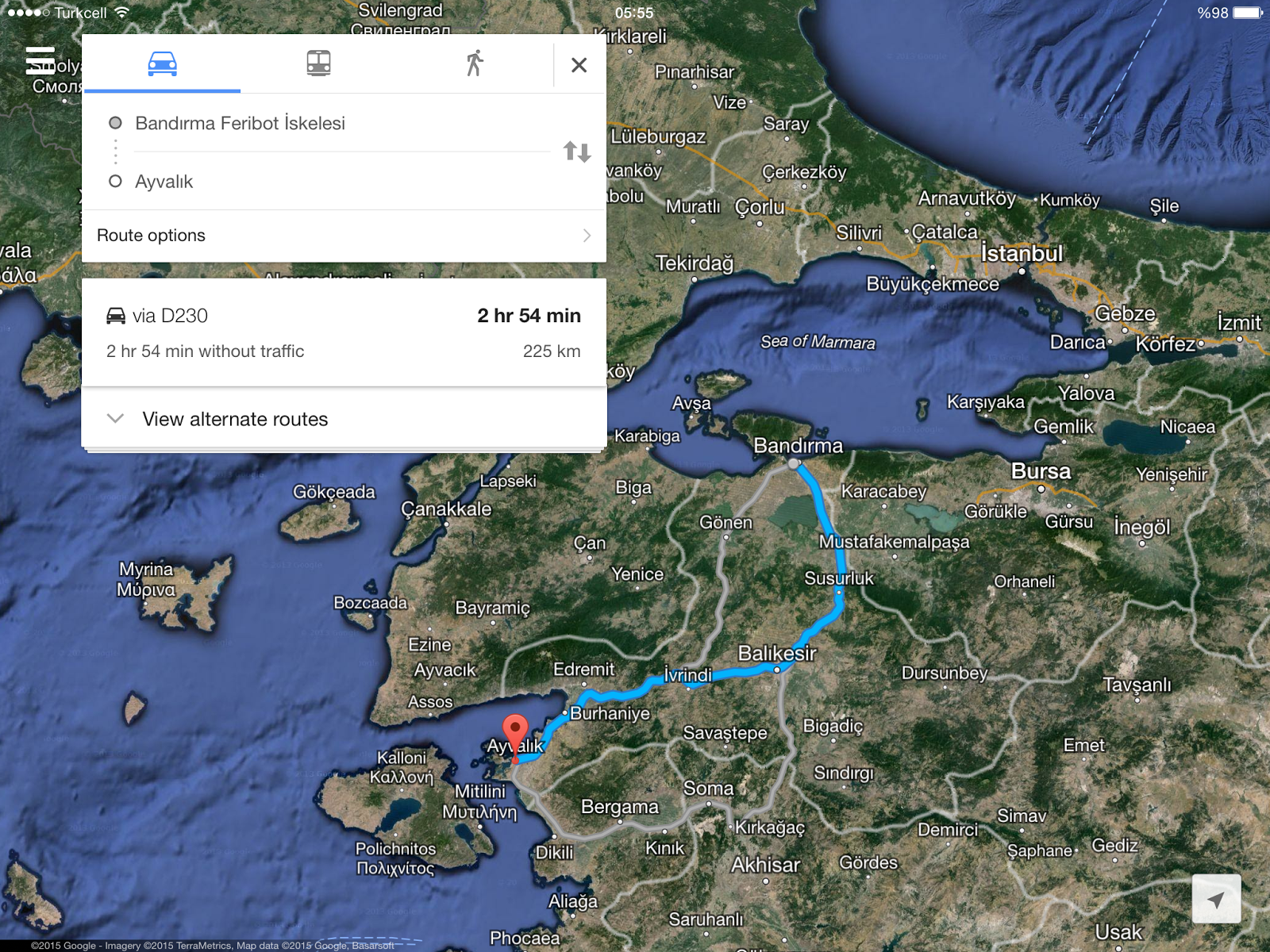 The main tourist attractions of Ayvalik

As soon as you step on the Ayvalik ground, the old houses of this city will attract your attention – most of which are built in neo gothic style. Walking through the city, you’ll feel like you’re back into the life which was here 100 years ago. Beautiful bay and romantic narrow streets of the old town will leave you breathless. 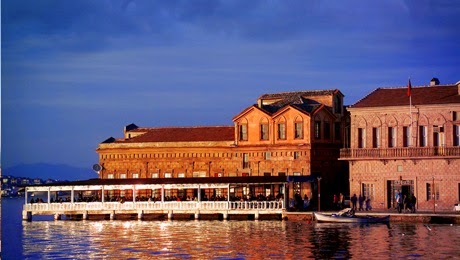 Churches and monasteries represent the largest cultural richness of Ayvalik. In the city center there is a “Hour Mosque” (Saat Camii), which is believed to have been built in 1850. This former church has been built by the Greeks, under the name of Agios Ioannis, but it was turned into a mosque in 1928. In addition to this, other famous churches in the city are Cinarli Camii (also a former Greek Church, with numerous gorgeous ornaments) and Taksiyarhis Church (built in 1873 – in the Byzantine style). 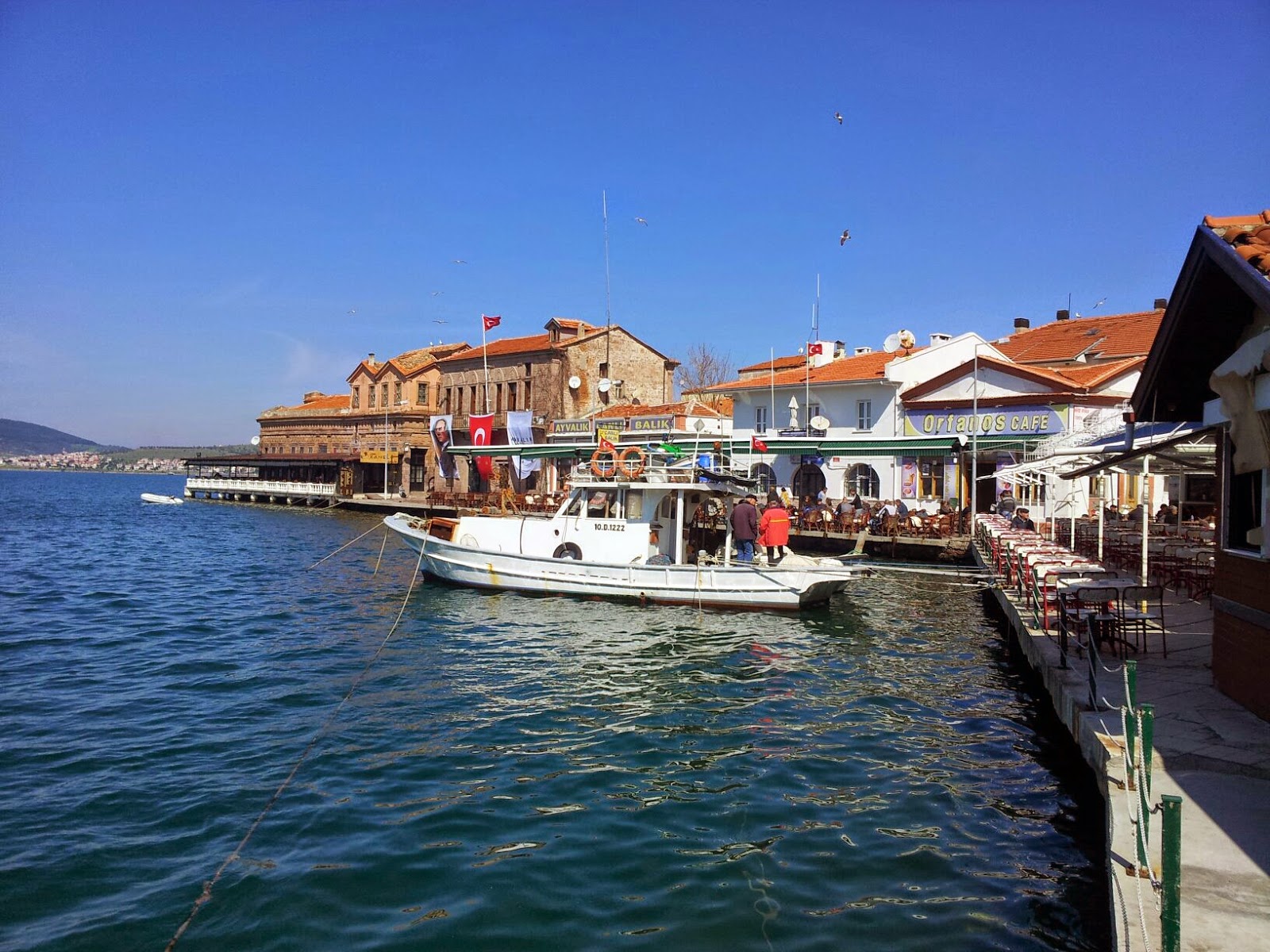 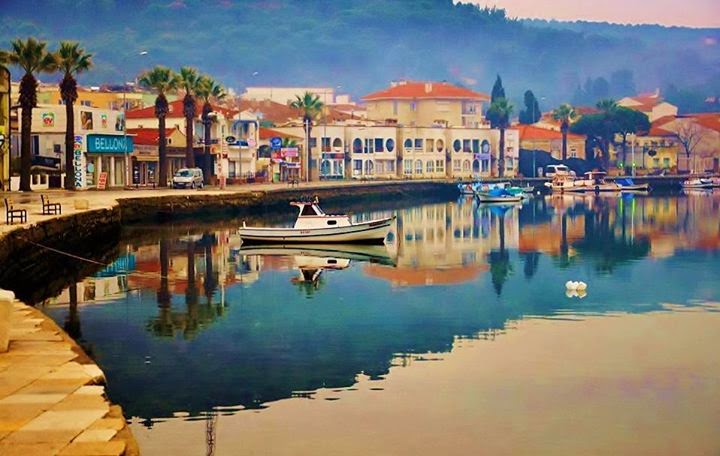 Eight kilometers south of Ayvalik, located the highest place in the whole region called “Devil’s Table” (Şeytan Sofrası). The Devil’s table is known for spectacular views of the surroundings and it is the most suitable place for photographing the sunset. Hill next to the Devil’s table bears the name “Tavsan Kulaklari” (it means rabbit ears) because the rocks look exactly like rabbit ears. 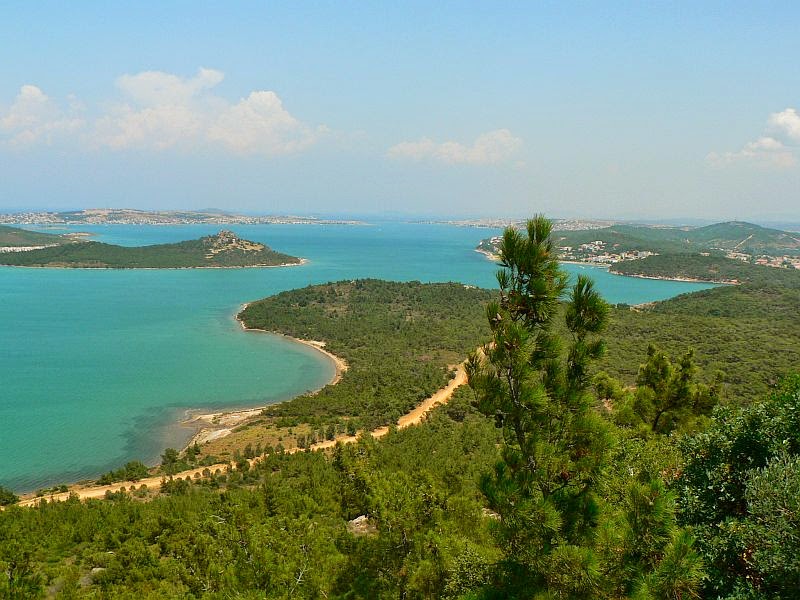 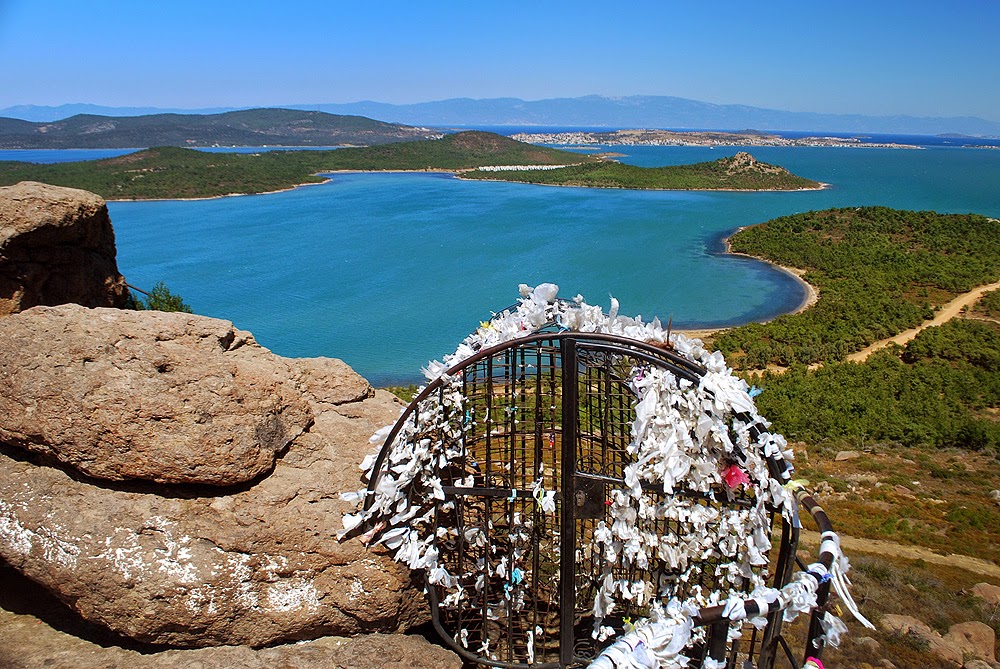 Opposite the town, on the other side of the bay, it is situated delightful Cunda Island (also called Alibey Island). This “island of beautiful fragrance” is connected to the mainland (by a bridge and causeway) and with nearby island Lale Adasi. It is considered as a famous tourist attraction with the typical insular settlement of ancient Greek architecture and the church of Saint Nicholas, which dominates the island. 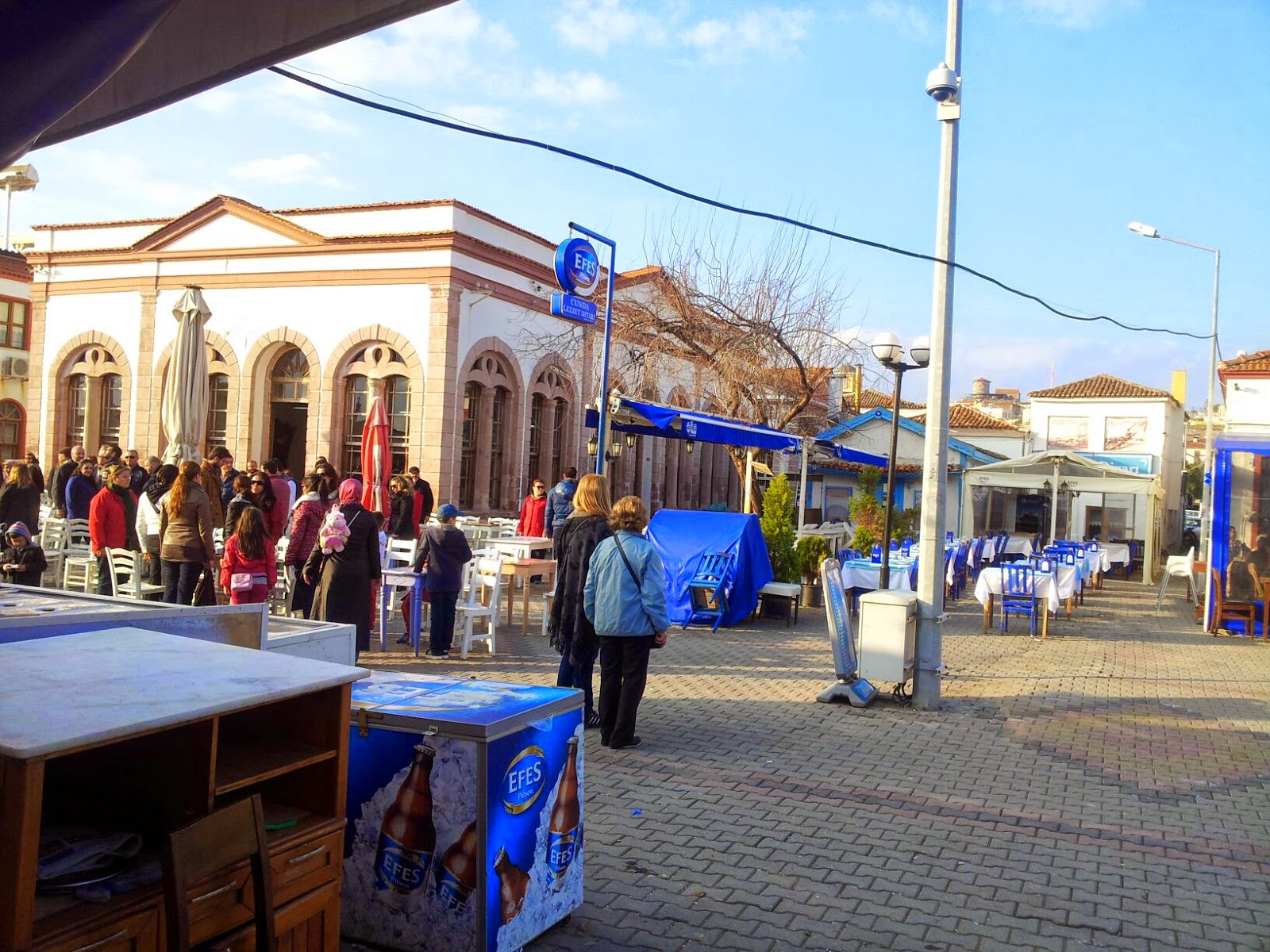 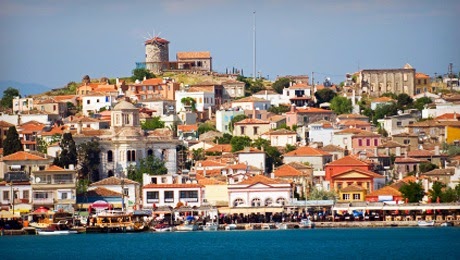 There are about 10 beaches around Ayvalik, which you can reach by car or boat. However, this city has two longest sandy beaches of Turkey: Sarimsakli and Altinova. In addition to these two beaches, Badavut Beach is another beach that you must visit if you will spend your summer vacation in this part of Turkey.

Sarimsakli beach is, without doubt, one of the most beautiful, with a large number of cafes, restaurants and shops, as well as sports facilities where you can rent equipment for water skiing. This beach is 7 km long, 100 m wide, and covered by the characteristic white sand. Sarimsakli sand is the certificate holder of the World Health Organization as one of the best in the world.

Altinova beach (about 13 km south of Ayvalik) is a favorite among tourists thanks to its sparkling golden sand and clear blue sea. It provides excellent conditions for a picnic, and it is also a great place for diving, surfing and sailing. Access and use of the beach is free!

Badavut Beach is located in front of Sarimsakli, between the road and the pine forest. During the summer season, local fishermen offer their daily catch of fresh sea fish. Badavut Beach is a paradise for surfers because the local wind which blows from the surrounding mountains makes this place suitable for surfing and sailing. 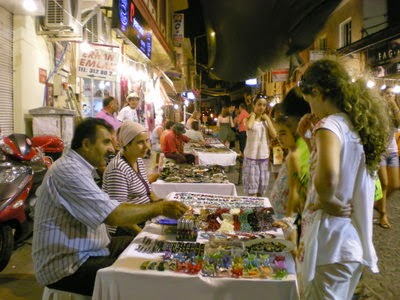 Shopping in Ayvalik is a real pleasure for tourists. There are numerous shops and stores that offer a wide variety of goods – different leather goods, interesting souvenirs, local spices, high-quality ceramics, Turkish carpets and rugs (hand-made with stunning designs), jewelry and so on. Bargaining skill is especially important here and it makes a special charm of purchase.

Don’t miss the opportunity to visit a famous bazaar in this city on Thursday. On this day, you can buy anything you want at incredibly low prices – quality clothing, hand making things of leather and cotton, as well as other goods necessary for the household. Also, you will find an abundance of fresh groceries such as vegetables, fruits, cheese, eggs, honey, local spices…

On the Riviera you can enjoy a cup of sage tea or Turkish coffee, a glass of Efes beer, and a popular local specialty Ayvalik toast – sandwich with cheese, sausage, sour cucumber, tomato and mayonnaise. Considering that sea around the city is extremely rich in fish, local cuisine consists precisely of seafood, which are usually prepared in olive oil. We recommend that you try the mussels (tava midie) and fried calamari (squid).

You can have great delicious seafood dinners at any of the restaurants of Ayvalık and Cunda Island. There’s an expression in Turkish about the place as : “Rakı, Balık, Ayvalık” which means “Raki, Fish and Ayvalık”- which emphasises that they cannot be seperated.

Especially Tas Kahve (on Cunda Island) is usually so crowded in the Evenings and you can enjoy your ice cream and/or/with lokma (a kind of Aegean sweat, it’s so tasty, you need to try) and should have Turkish Coffee there if you are lucky enough to find a chair to get seated.

Yes, Cunda is absolutely popular that you may see lots of tourists, locals and also a lot of famous Turkish writers, actors and musicians enjoy their summer season around there. You may not recognise them for sure; but if you see a lot of Turkish guys and gals trying to have some photo with a man or woman, yes, that man/woman is famous in Turkey.

As for night life in this city, it is not as rich as in other touristic cities of Turkey, but it exists. In the city center, there are several discotheques and night bars that you can visit if you love dancing and night fun. Discos at sea (i.e., to the anchored boat) provide excellent entertainment with music and dancing until the early morning. However, we suggest going to the nearby Sarimsakli where you will find more night bars and better nightlife. After a turbulent entertainment, walk through Ayvalik during quiet and pleasant night will come in handy!

And also you can have a regular boat tour or a boat trip from Ayvalık to Cunda just to enjoy. It’s quite charming too…

For the most recommended hotels of Ayvalık and Cunda, you might want to visit this link (you can click here).

At the page you will be able to select from the best and most suitable hotels but the only suggestion that I could make about the staying issue is: I would prefer the Cunda Island hotels for myself because I really love to spend some time at Cunda; having the nice Aegean style food, (breakfast and dinner especially) and drinking Raki at night with my good friends or my lovely family and then having a nice walk on the seaside and enjoying my coffee at the end. I must say that: it’s priceless… 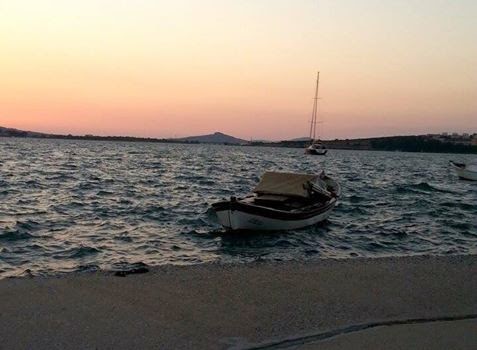 16 thoughts on “Ayvalık – Think of Spending Your Life There…”