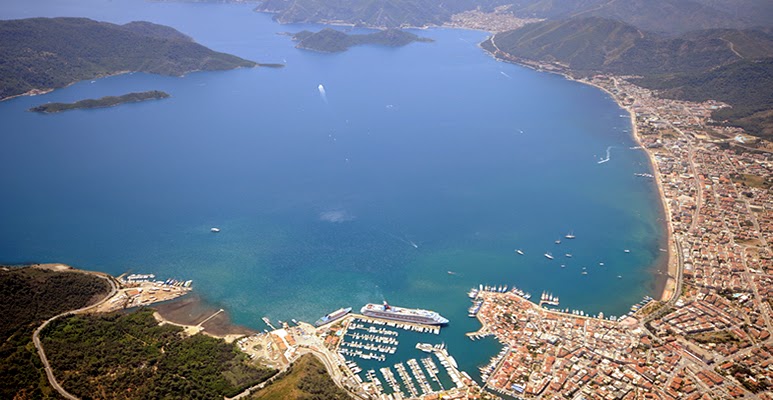 Marmaris – a “pearl” of the Turkish Riviera- is located in a wide bay where both Aegean and Mediterranean Sea touch, close to many cultural monuments as Ephesus, Miletus and Pamukkale. Warm sea, long sandy beaches, diverse shopping centers and craft shops, well-organized daytime and nighttime entertainments, with traditionally rich gastronomic offer, made this coastal town very popular for tourists from many countries. In fact, the peninsula that Marmaris is located on can be called as a peace of heaven on Earth and you sure will agree with me when you see the miracles of the nature surrounding the region.
Yes, here I have to confess that every single Turkish person has a dream of spending the rest of their life around there at a small cottage after retirement. If you have a chance to spend a summer vacation in Marmaris, the beautiful nature around, the beaches and bays, the old part of Marmaris -that still is in its traditional form- and the nightlife will surely attract more of your attention.

In addition, as a tourist while experiencing an unforgettable seatrip of the Aegean Sea, you can also visit the famous Icmeler beach as well as many beautiful beaches of Cleopatra Island. Marmaris is known as one of the best dive sites in the southern part of the Aegean Sea, so enthusiastic divers should keep this in mind!

Overview of the city 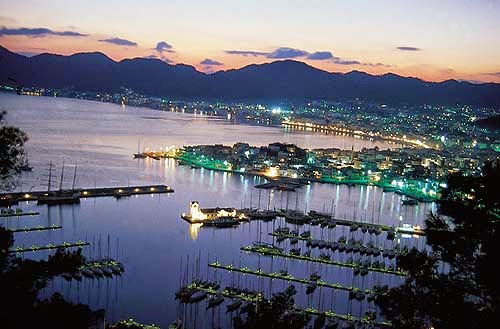 Marmaris is a port city in Muğla Province and a big tourist center on the Mediterranean coast in southeastern part of Turkey. Starting from early 1980s, the town developed rapidly as other new raising touristic attractions of Turkey, and its main economic activity now is tourism. From the former small sleepy fishing village, it has become a modern tourist center located along the coastline of the Turkish Riviera.

According to data from 2010, the city had a population of 30,957 inhabitants, but the number of the population rises at around 400,000 people during the height of the tourist season. Marmaris has a Mediterranean climate, characterized by humid and warm summers (temperatures can reach over 40 °C during July and August) and cold and rainy winters. A noticable number of tourists tend to visit this city at the beginning of autumn (especially in September, or even in October), to avoid unbearable high temperatures. But, this region is not as hot as Antalya side.

This town has an exceptional geographical position because it is located on the coast and surrounded by mountain ranges from two sides. Around the city, there are huge citrus plantations and old pine forests. It is also a famous center for diving and sailing, that possesses two large and several smaller marinas. The long promenade along the coast is very suitable for romantic visitors. Numerous minibuses, which are almost always available during the day, connect the city center and the nearby beaches. The nearest airports are Dalaman Airport – an international airport located about 100 km.s from the city, and Milas–Bodrum Airport – about 150 km.s away. 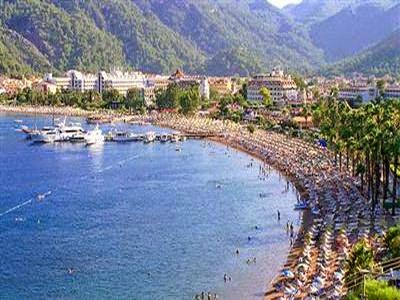 Marmaris will surely enchant you with its wonderful sandy beaches (sand is mainly black and a bit gritty), crystal clear sea water and the nice coast. The most popular beaches are:

What to do in and around Marmaris? 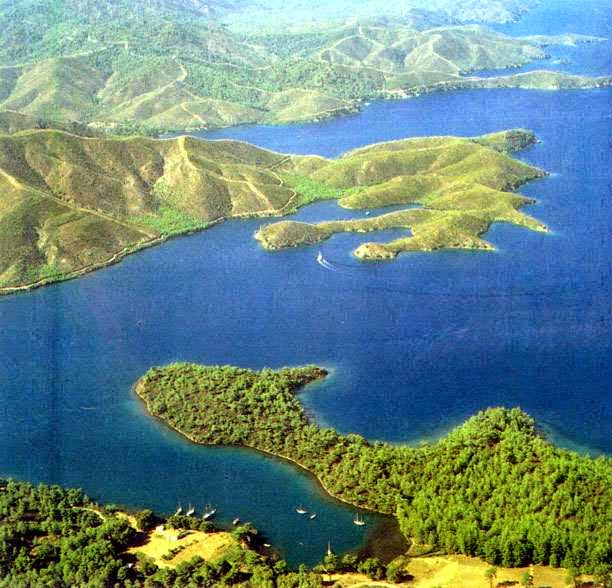 After swimming in the warm sea water and lying on the sandy beach, you need to see some landmarks of this city and do some of the things that will remain in your memory forever.

If you’re still thinking which hotel to choose in Marmaris, we may propose you some of our selection of several well-known luxury hotels and apartments. For sure, these several hotels are just for giving you an idea. If you wish to see further selections you can click here and see other hotels in Marmaris.

s  Sunrise Hotel – Luxury 4 star hotel with private wonderful beaches over public promenade in front of pool. Facilities at the hotel include a 24 hour reception, a seasonal swimming pool and an airport shuttle service.

s  HotelAqua – It is located at 100 m long sandy-gravelly beach, 200 m far away from the center of Icmeler and 7 km from the city of Marmaris. The hotel has 216 standard and deluxe rooms. It offers: restaurants, pool and beach bar, outdoor and indoor swimming pool, spa & wellness, fitness center and etc.

s  ClubAida – This comfortable hotel is located 500 meters from the nearest beach. All rooms have the modern and elegant furniture. From some balconies, there is a unique view of the Aegean Sea. Here, guests can relax in the sauna, spa center, Turkish bath, Jacuzzi or to exercise in a well equipped gym.

And the last but not the least part: we’ve found some useful and detailed stuff while trying to learn more about Marmaris. You can also check:

for more about rentals, tours and transportation issues.

Girne (or Kyrenia? Who cares, it's amazing...)
Have you heard of Sarimsakli beach?
How About a Summertime Vacation in Antalya?