Ancient City of Ephesus; the understanding of civilization of the time and other surprises you will see in and around the city will actually amaze and charm you a lot.

General info on the Ancient City of Ephesus 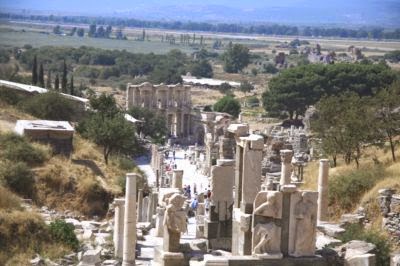 Ephesus is an ancient Greek city that has a history of nearly 8000 years. The city was established around 6000 BC and was one of the biggest commerce centers of the time. Today, the city is not so close to the shore, however, at the time of construction, Ephesus was a seaport (now it is 6 kilometers far away from the sea), which turned the city into an important commercial place.

I will explain certain facts about the buildings and facilities of the city in the upcoming paragraphs. But, in short, we can say that The Great Theater, Temple of Artemis and The Library of Celsus are the most attractive and they are nearly unbelievable structures. And also there’s the House of Virgin Mary, the small, green and nice village of Şirince (famous of vines, especially made of different fruits such as tangerine, melon, etc.). There are also lots of details inside and around the city. These include a small odeon, terrace houses, temples, baths, churches, stadium and even a brothel. In short, a lot of surprising stuff is waiting for you there. For sure, if you decide to be one of the 1,5 million annual visitors of Ephesus.

Where is the Ancient City of Ephesus and how can I get there?

Ephesus is located on the west part of Turkey, close to Agean Sea coast inside the municipal borders of İzmir. If you visit Turkey with a cruise trip, Ephesus will be half an hour drive from Kuşadası Seaport. When you go to İzmir by airway, you’ll have to drive about an hour to Ancient City of Ephesus from Adnan Menderes airport. 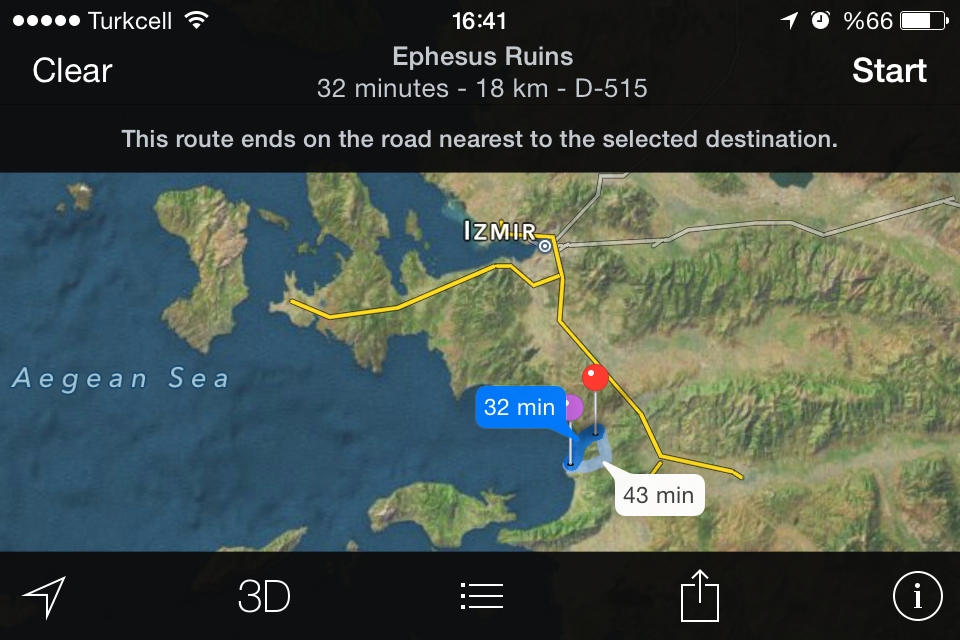 In case you are staying in İzmir, you will be able to find some daily tours to the region. With these tours, you can also visit Temple of Artemis, Şirince, House of Mother Mary, Seven Sleepers and The Ephesus Museum in Selçuk. On the other hand, or you can use public transportation. But I would suggest the daily tours or renting a car to be able to see everything in and around. If you prefer public transportation to Selçuk, you can take a taxi from the city center, and that voyage will cost about 10 $. 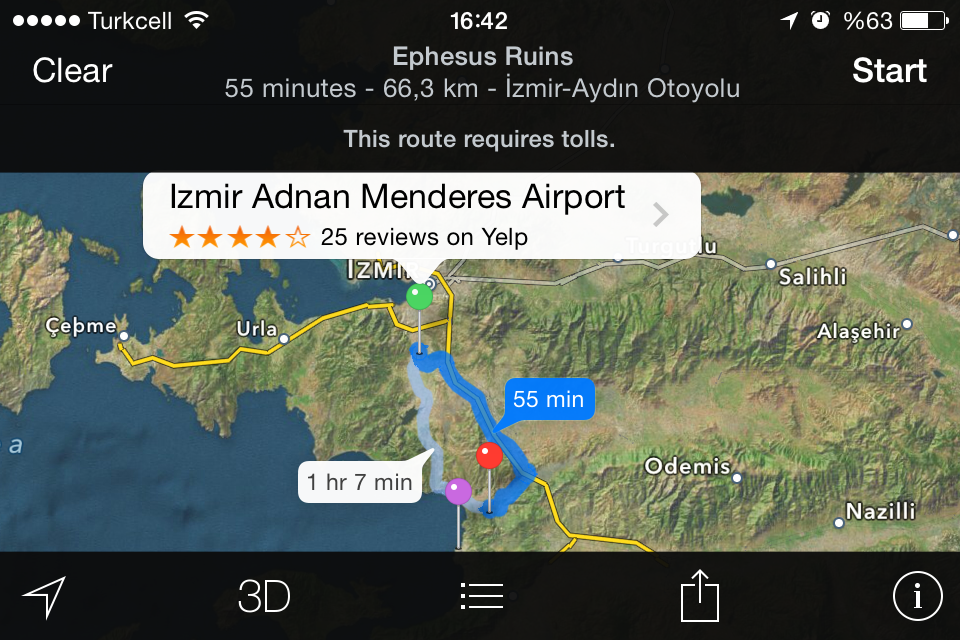 How much time do I need to see everything in the Ancient City of Ephesus?

A fact about the city: you will at least need a whole day to understand what is going on around Ephesus. A tourist might see the whole Ancient City in about 2 hours with a fast scan. But if you wish to listen to a tourist guide (which is the best option for me), you will have to spend about 5 to 6 hours only in the Ancient City of Ephesus. And if you wish to see the places around Ephesus, you might want to think of extending your visit to another day. When you do so, you can be sure that it’s worth to see that area wtih a lot of history and natural beauties. You can do it without slightest hesitation.

What is inside the Ancient City of Ephesus?

There are two gates of the city. You may also use the second gate to enter the city but you will need to take a taxi to go there. The visitors generally use the main gate for the entrance. As you walk in from the gates (the entrance fee is going to be about 15 $) you will see the Grand Theater just on your left. On the way to the Great Theater, you will see the boards that explain the historical evolution of the city. And also you will see some milestones and gravestones on the way.

The stories of the milestones are little bit interesting. As far as I understood from what I read, the measurement unit of length around 3rd century BC was “stadia”. At the time 1 stadia was equal to 185 meters. And on the milestones of the time of the Roman Empire, the measurement of length is “milia passuum”, which meant “a thousand steps”. I don’t know where today’s mile comes from, but this “a thousand step” thing might mean something.

Anyways, lets get back to our subject. 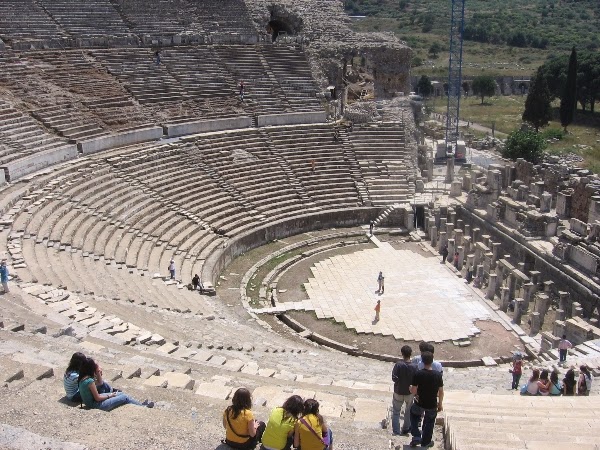 The theater has a capacity of 24.000 people and is known as the biggest of the ancient world. It is still in good condition. However, the stage with three layers, which was the scene of gladiators, sports events and artistic shows is not in a very good condition anymore. We can tell the same for some of the seats as well. Also, poeple of the time held huge meetings in the Great Theater. It will be correct to say that the acoustic design of these theaters of ancient times is a magnificent specialty of such structures. 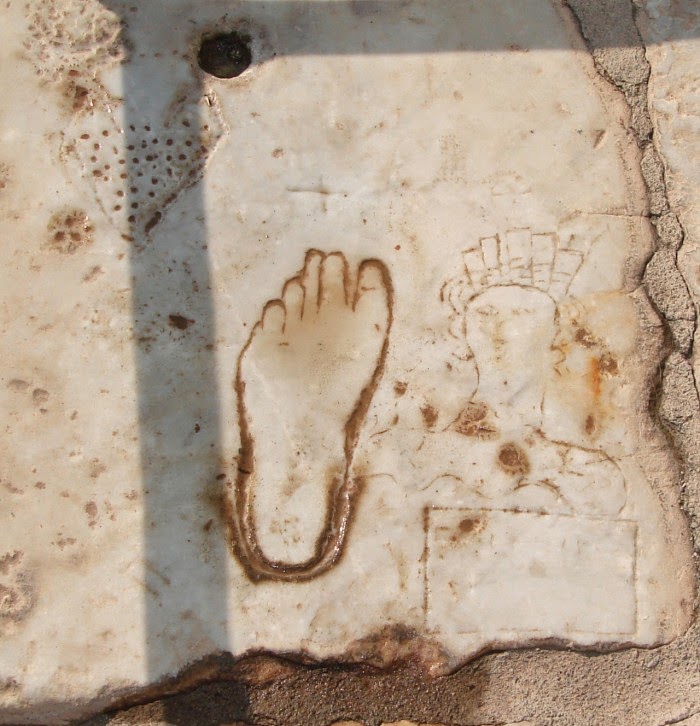 On the way from the Great Theater to the Library, there’s an interesting figure. There, you will see a footstep, a lady, and money figures printed on the pavement. That figures show the direction to the so called “Love House” of the time. The “Love House” (meaning brothel of the time), was serving to the sailors that visited the city. It was a big source of income for the citizens of Ephesus.

The Library of Celcus 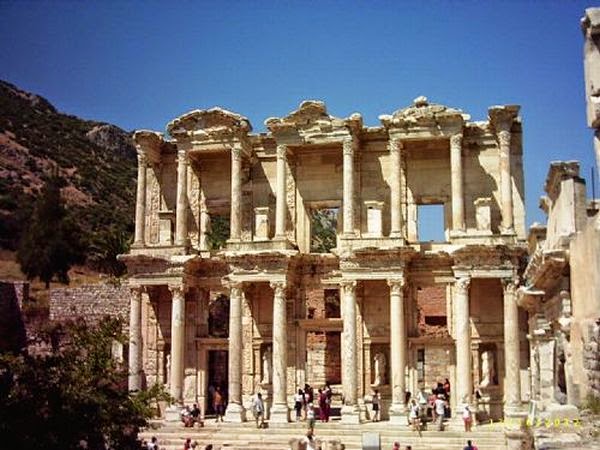 The archaelogists tell us that the Romans constructed the library in 125 BC. This structure is one of the most important buildings of the city. The height of the building is 15 meters. It seems like a two floor building when we look from outside. However, it was a constuction with only one big saloon. What makes this building such important is the fact that it helped a lot of thinkers and scientists to come to the scene of history.

Agora of the Ancient City of Ephesus 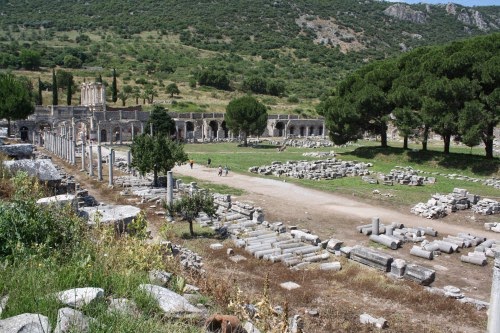 And just next to the library, there is the Agora. A big meeting and commerce point. In fact, there are several Agoras in the whole city. They were used for meetings, trade and as a place for bazaar in ancient times. You can see some buildings that were used as shops, surrounding the agora.

Terrace Houses of the Ancient City of Ephesus 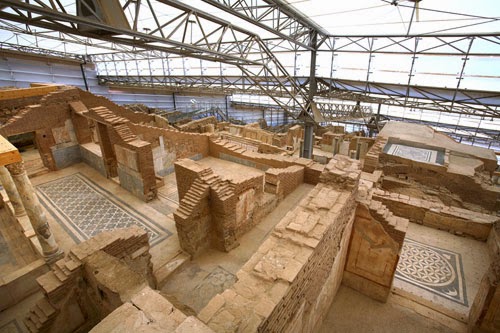 When you  quit the library and go straight ahead, you will see the famous Terrace houses on the right hand. The terrace houses are also called as the houses of the rich because they are just in the center of the city. These houses have recently been restored. The precious material that are found in the houses are exhibited in Selçuk Ephesus Museum now. The houses were built on the hill. In every floor, each house has a little entrance hall. They have a heating system similar to baths and as because they do not have any windows, the rooms are little bit dark. In order to see inside the terrace houses, they ask an additional fee about 6 $ in the entrance.

The Street of Curetes 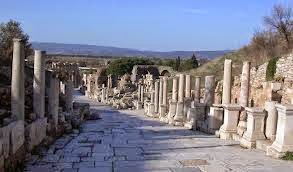 This street ties the library to the Heracleus Gate of the city. It’s a 210 meters long road with a width of 7 to 10 meters The name of the street comes from the pirates who were named as curetes. The street has a lot of aspects to see on both right and left sides. The baths, latrine, Traianus Fountain, Temple of Hadrianus and shops are some of the structures that you will see on the road.

Beulouterion (the parliament) and Odeon (the smaller theater)

The rich and distinguished members of the city used these structures to talk about the problems and the future of Ephesus. Later on they became the hosts of concerts and theater games.

I wish I could write about every single corner of the ancient city of Ephesus here. But it would fill a whole book and might be a knowledge of hundreds of pages. As I mentioned above, if you decide to visit Ephesus and spare some 5 to 6 hour for the ancient city, you will learn a lot of interesting information and have an understanding of the civilization of the ancient time. This is also a good and usable knowledge for understanding today’s lifestyle.

As the last words; please don’t forget your sun protection, hats or umbrellas. If you visit the city in summer time, the sunlight itself and its reflection from marbles might cause problems for your skin if you spend too much time. And also, it’s a little bit expensive to eat and drink there. So, it’s better you have at least enough of your drinking water inside your bags.

You might want to buy some souvenirs that you can find outside the gate of the city. But if you wish to buy some leather or carpet products, the place is not that much of a suitable one (because it will be little bit expensive) to buy such material. You could visit Selçuk or Kuşadası to buy such kind of stuff.

And one more thing, in my opinion, the best part of traveling is eating. You can have very good grilled small pieces of meat on wooden skewers (we call them “cop sis”). Around there and if you wish for anything else, I could advice meatballs as well. 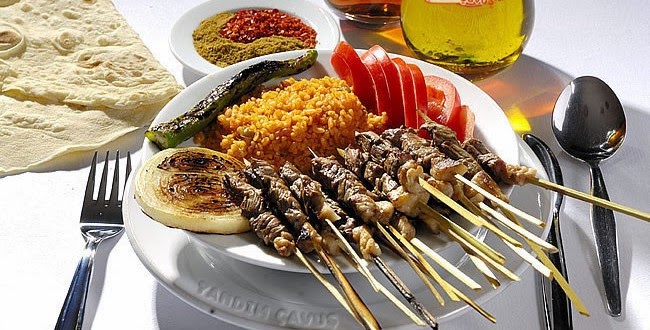 I hope you enjoy your time around Ephesus!

Please do not hesitate to share all of your comments and recommendations about this post on Ephesus. So that we can be able to maximise the quality of our website.

3 thoughts on “The Ancient City of Ephesus”